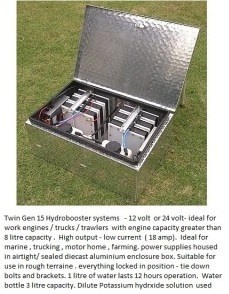 INVESTIGATIONS ON OXY-HYDROGEN GAS AS ALTERNATIVE FUELS, ON THE PERFORMANCE OF TWIN CYLINDER DIESEL ENGINE

Oxy-Hydrogen gas is a recent discovery to be used to increase the fuel economy and engine performance of any Diesel, Petrol or LPG Fueled engine as used on trucking, cars, farming, marine and mining equipment. The attached link is a academic study on the use of hydrogen / oxygen gas commonly known as Oxy-Hydrogen on the engine performance and fuel economy of a two cylinder Diesel engine under a variety of loading conditions as found in real life applications of diesel engines.

Presence of carbon element in the conventional fuel like petrol and diesel leads to emission pollutions which are associated with the combustion process in traditional internal combustion engine loaded on automobiles. Increasing stringency in pollution norms is forcing the researchers to work on methods to reduce these emissions especially in the field of alternative fuels. Oxy hydrogen gas, which is enriched mixture of hydrogen and oxygen bonded together molecularly and magnetically and producer gas are emerging as best alternative fuels in the recent past. In this study methods to produce oxy hydrogen gas are discussed in detail with their comparison. Also discussions are made on the process of generating producer gas from biomass through pyrolysis process from coconut leaves which are available on the west coast of India, especially the Konkan region. Finally the effect of these two alternative fuels on the performance of the diesel engine is tested when sent inside combustion chamber of twin cylinder diesel engine in blend with the diesel. Both alternative fuels improves the performance of diesel engine in terms of reduced values of brake specific fuel consumption and improved values of brake thermal efficiency. Amongst both fuels oxy hydrogen is observed to be the best option to improve efficiency of diesel engine

Click on this link to view this PDF report.

The Summary of the findings are shown below—-

Experimental tests to investigate the comparison between oxy hydrogen gas and producer gas are carried out on twin cylinder diesel engine. Oxy hydrogen gas has been generated by electrolysis process and producer gas by pyrolysis. Both the alternative fuels mixed with fresh air before entering the combustion chamber. BSFC, Brake thermal efficiency, speed and load are the performance parameters kept under observation. The following conclusions are drawn:

3. Presence of extra oxy in both alternative fuels helps to improve the combustion efficiency further more. Water vapour is one of byproduct of combustion process with oxy hydrogen and diesel blend. This decreases the combustion chamber temperature and thus decreases the chances of engine detonation. Very less amount of oxygen is available with producer gas and diesel blend hence it is not the case with this combination.

5. As far as implementation of both the alternative fuels with engine on automobiles is concern, oxy hydrogen gas is best suitable compared to producer gas. The size of the oxyhydrogen gas generation module is less and easy to install under hood of automobile engine. The size of the producer gas generation module is very large and nearly impossible to fit on automobile engines, hence best suitable for the stationary engines application like pump, generators etc. Coal is coming as one of the byproduct of the pyrolysis process, can be used for domestic purpose, and hence an added advantage The Hydrogen fuel systems produced by Hydrogenfuelsystems pty ltd are compact and well designed to easily fit into positions under the engine Hood or anywhere in the vehicle

6. Presence of oxy hydrogen gas during the process of combustion decreases the
hydrocarbon emissions from diesel engine [14]. Reduction in HC is observed because of
short quenching distance and wide flammability range of hydrogen present in large
quantity in oxy hydrogen and diesel blend. Also an increase in turbulence intensity
mixing process of burnt and unburnt gases increases the oxidation rate of HC thereby
decreasing the HC emission from engine. More percentage of unburnt gases in producer
gas diesel blend helps in the reduction of NOx from the diesel engine same as the exhaust
gas recirculation (EGR) methods. 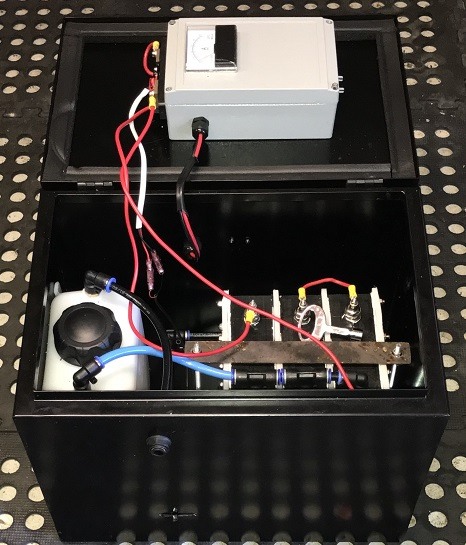 Abstract Facing with the ever increasing cost of conventional fossil fuels, worldwide researches are working overtime to cost effectively improve internal combustion engine (ICE) fuel economy and emission characteristics. In recent years, many researchers have focused on the study of alternative fuels which benefit enhancing the engine economic and emissions characteristics.

In this project, hydroxy gas (HHO)was produced by the electrolysis process of an electrolyte (KOH(aq)) with stainless steel electrodes in a leak proof plexiglass reactor (hydrogen generator). Hydroxy gas was used as a supplementary fuel in a single cylinder, spark ignition (SI) engine without any modification and without need for storage tanks. Its effects on exhaust emissions, engine performance characteristics and specific fuel consumption are investigated

CLick here for the information on the above subject matter

This paper presents the effects of introducing hydrogen with gasoline on the engine performance like power, torque and efficiency of spark ignition (SI) engine. Hydrogen is found to be one of the important energy substitutes of the future era. Hydrogen as a renewable energy source provides the potential for a sustainable development, particularly in the automotive and energy storing sector. Hydrogen driven vehicles reduce both local as well as global emissions. By changing the amount of hydrogen percentage with gasoline, the data has been recorded and analyzed to achieve the economical blend percentage of hydrogen and gasoline to obtain the best performance of the SI engine.

Hydrogen is the fuel of the future. It is an energy carrier that can be used in internal combustion (IC) engines producing no greenhouse gas emissions virtually when combusted with oxygen. The only emission is water vapor. It is a carbon-free energy carrier, and likely to play an important role in a world with severe constraints on greenhouse gas emissions. Hydrogen has extremely wide ignition limits. This allows a spark ignition engine to operate on hydrogen with very little throttling. Stoichiometric hydrogen air mixture burns seven times as fast as the corresponding gasoline air mixture. This gives great advantage in IC engines, leading to higher engine speeds and greater thermal efficiency (Ganeshan, 2007). The potential of using hydrogen for small horsepower SI engines was evaluated and compared with compressed natural gas (CNG). Another study dealt on certain drawbacks of hydrogen fuelled SI engines, such as high NOx emission and small power output to determine the performance, emission and combustion characteristics of hydrogen fuelled SI engines. The design features and the current operational limitations associated with the hydrogen fuelled SI engines were reviewed (Karim, 2000). The onset of knock in hydrogen fuelled SI engine applications was investigated (Li and Karim, 2004). Several problems of the injectors (leakage, unequal response time-opening delay and poor durability) as available then, have mostly been solved nowadays due to the worldwide increased research on gaseous injection systems (natural gas, LPG, etc). To run a hydrogen engine, the mixture formation of air and hydrogen need not to be controlled precisely (Das, 1990). Consequently, simple systems such as an external mixture system with a gas carburetor can be used for the fuel supply. This system is firstly implemented on the tested engine. However, combustion process can be controlled completely only with an injection system and an electronic control unit (electronic management system), as used for all new gasoline engines. Hence, the carburetor is discarded to be replaced by a gas injection system in the inlet manifold, allowing multi-point *Corresponding author. Email: raviranjan1611@gmail.com. 138 J. Pet. Technol. Altern. Fuels Figure 1. Experimental setup. Table 1. Specifications of the test engine. Items Engine (gasoline) Mark 231H Engine type Four stroke, Three cylinder Bore (mm) 66.5 Stroke (mm) 72 Compression ratio 9.2/1 Fuel system Petrol (MPFI) cooling Water cooled Engine working temperature (°C) 120 sequential injection of the gaseous hydrogen fuel in each inlet channel just before the inlet valve. For gaseous fuels, an additional and important advantage is better resistance to backfire (explosion of the air/fuel mixture in the inlet manifold) (Sorusbay and Veziroglu, 1988; Kondo et al.,1996; Lee et al., 1995; Guo et al., 1999). The danger of backfire is eliminated with a sequential timed multipoint injection of hydrogen and the corresponding electronic management system. As a result, the power output of the engine is increased. The optimization of the engine parameters was studied. The ignition timing has a strong influence on efficiency of the engine; it should be regulated adequately as a function of the mixture richness (Verhelst and Sierens, 2001). Moderate engine performance is obtained in hydrogen combustion with a special injector that is equipped with a leak structure and a glow plug (Ikegami et al., 1982). The smoke emission reduces from 4.8 BSN to 0.3 BSN with simultaneous reduction of NOX when using the hydrogen in dual fuel mode. Braking thermal efficiency increases from around 23.59 to 29% with optimized injection starting and duration. The emission such as CO, CO2 and HC is reduced drastically. The NOX emission decreases from 6.14 g/kWh to 3.14 g/kW-h at full load. The reduction is due to efficient combustion resulting from the hydrogen combustion (Sarvanan et al., 2007). The limit of flammability of hydrogen varies from an equivalence ratio of 0.1 to 7.1; hence the engine can be operated with a wide range of air fuel ratio (Yi et al., 2000). Hydrogen fuelled engine efficiency is superior to gasoline engine, especially at small partial loads operating conditions, due to a better combustion process and load qualitative adjustment method. The level of pollutant emissions decreases at the hydrogen fuelling. The exhaust gases do not contain CO2 or lots of polluting substances provided by classic engines such as CO, HC, particles and lead compounds (Negurescu et al., 2012). Tyagi and Ranjan (2013) minimize exhaust pollutant by heating catalytic converter. The objective of this work is to investigate the effect of the gasoline-hydrogen blended fuel on engine power and torque, to quantify engine performance and to find the best hydrogen and gasoline fuel blend ratio for SI engines.

Combustion characteristics of a hydrogen fueled SI engine with gasoline-hydrogen blends under seven different ignition timings, 70% wide open throttle(WOT) and lean mixture condition were investigated, and the important results were drawn. The power output of the engine is increased without danger of backfire, with a timed multiport fuel injection system of hydrogen and the corresponding electronic management system. The optimization of the engine parameters were discussed in terms of power output, brake mean effective pressure, torque output and effective thermal efficiency. The injection of hydrogen at the beginning of the compression stroke has shown smooth engine running at stoichiometric air fuel ratio without abnormal burning. The advantage of lean mixtures to operate at low load conditions without a throttle valve is found to be valid. For specific ignition timing, the brake mean effective pressure and the effective thermal efficiency increased while the combustion durations decreased with the increase of hydrogen fraction in gasoline hydrogen blend. There is a significant influence of Ignition timing on engine performance and combustion. With the decrease in time intervals from the ending of fuel injection to the ignition start, brake mean effective pressure and effective thermal efficiency increased